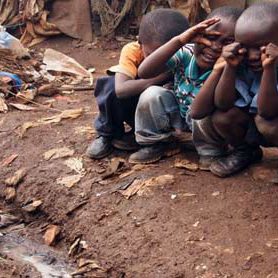 The increase of informal settlements in Kenya is a stumbling block to achieving universal access to water and proper sanitation by 2030, experts say.

According to the Kenya Water for Health Organization (KWAHO), over 2.5 million Kenyans occupy slum areas. The number is likely to increase going by estimation that by 2030, sixty percent of Kenyans will dwell in urban areas.

According to Mr. Patrick Alubbe, the executive director for KWAHO, sanitation in slums remains an issue which must be addressed for the country to attain the universal access to clean water and sanitation as envisaged in goal number six of the sustainable development goals.

Mr. Alubbe said Kenya loses Ksh27 billion due to sanitation related problems and Ksh 8 billion due to open defecation annually, an amount which can be saved if issues of sanitations are properly handled.

He said poor sanitation at the slums and generally within urban areas are consequences of many factors among them uncontrolled garbage disposal and inadequate land to build better latrines.

Other factors include untreated sewerage system.

He added that out of the 12 percent of national sewerage coverage only 5 percent get treated. To achieve proper sanitation, experts says innovative technology needs to be employed especially in slum areas in the country like Kibera, Korogocho and Kariobangi all in Nairobi and even in other slums like Oruba and Pandpieri in Migori county among others.

Kibera slums in Nairobi was several years back known for flying toilets (people defecating in plastic bags and throwing them away anyhow in any direction and everywhere) because of lack of proper disposal of the faecal matter coupled with poor latrine cover.

The good news is, the whole situation has changed with the construction of nine biocentres within the slum areas.

The centres, built by community groups with the support of Umande Trust have not only made steps in addressing sanitation issues at the slum but have also economically empowered many low income earners.

Mr. George Onyango, a member of Muvit group operating one of the biocentres at Kibera says the construction of the latrines, fitted with bio digesters which enabled them to also produce gas beside offering washrooms to the slum dwellers has saved many from the frequent outbreaks of sanitation related diseases in the slum. He said they averagely receive between 500 to 1000 people per day using their washrooms at a relatively low fee, a number he said used to defecate in the open using the “flying toilets.”

According to Mr. Onyango, individuals who try to construct their own latrines in the slum have found it difficult to do so because of scarcity of land.

Provision of an improved latrine for the slum dwellers is hence a reprieve to many who were defecating in the open.

He added that the use of the excreta to produce biogas which is used for cooking by slum dwellers at a very small fee has also helped them in managing the waste from the latrines. The project has seen 90 similar latrines which are also used in production of biogas constructed across the county.

However, an expert has warned that achieving open defecation free status is not an assurance to proper sanitation. Hygiene and sanitation specialist at Unicef, Engineer Sarh Kemoh has said.

Stopping defecating in the bush and using latrines at home, he said brings the problem of poor sanitation closer to them unless improved latrines are constructed and better excreta disposal mechanisms are employed.

He said the number of toilets constructed does not translate to usage adding that complementary behavior and practices which include hand washing with soap and water, proper use of toilets, safely emptied, transported, treated and disposed waste.

Dr Ombogo said landlords who are key in the urban total sanitation program especially in slum areas have not been accessible hence getting the right owner of rental houses has remained a big challenge in addressing sound sanitation.

Going forward the director public health said the department is in the process of developing better waste management mechanisms including producing biogas from the excreta and also coming up with punitive regulations on sanitation.

Slum dwellers on their side have blamed poor sanitation on lack of political good will saying that leaders have occasionally stopped the government from improving sanitation in some slum areas to protect their votes.