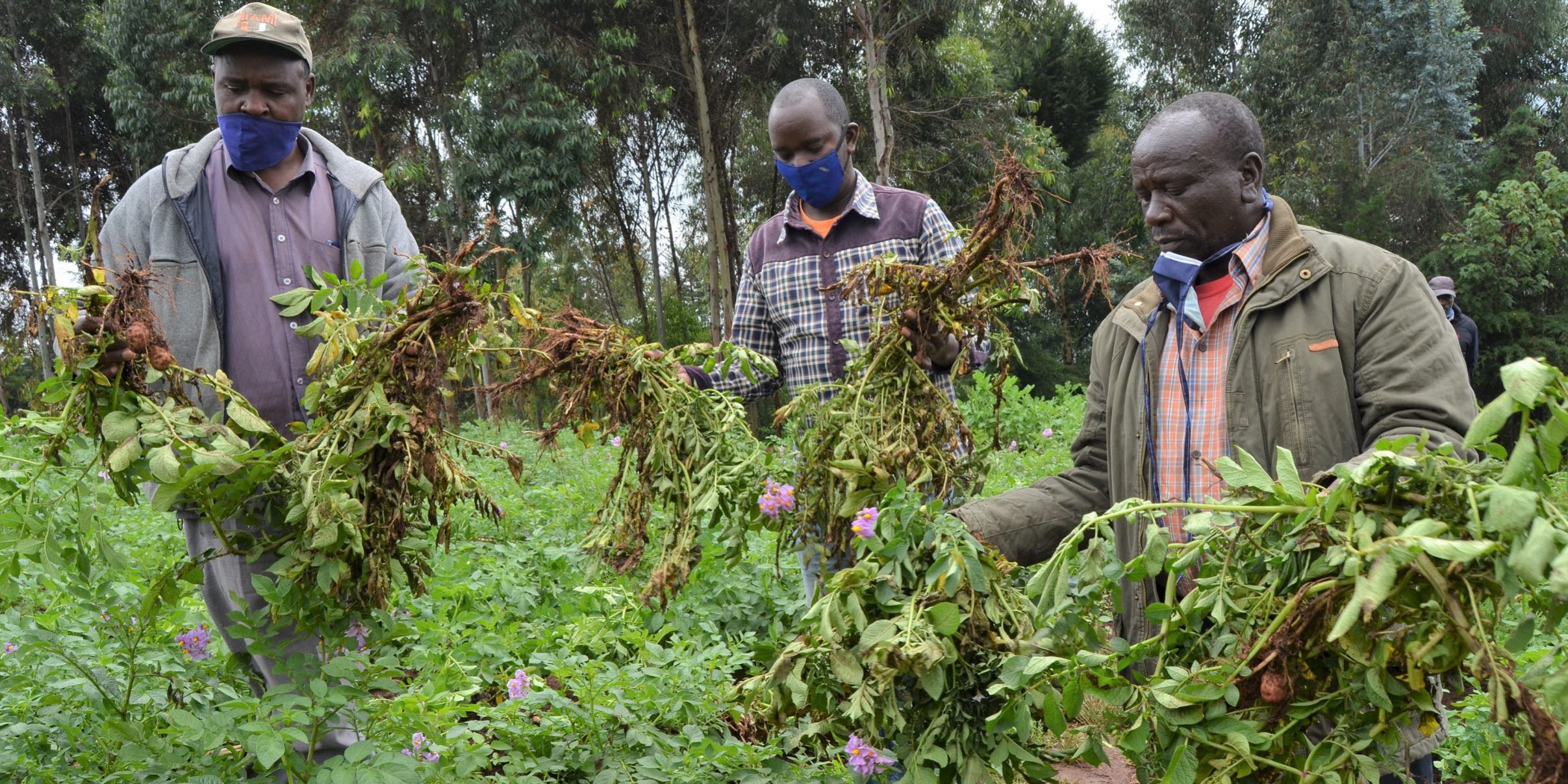 Every season, Margaret Kenzi, a potato farmer in Kenya’s Rift Valley, tirelessly works in her potato farm with hopes of a bumper harvest.

To her dismay, her efforts of three years have hardly yielded as she does not use certified potato seeds. She attributes this sorry state to the high cost of certified seeds, which has driven her to use regenerated seeds every planting season that are prone to attacks by pests and diseases.

“I depend on recycled seeds because certified seeds cost Sh3,000 (U$30) per bag of 50kg which I cannot afford due to the hard economy. And after harvesting, we are forced to sell our produce at a throwaway price to middlemen and brokers who invade our farms with ready cash. A 50kg bag of potatoes goes for between Sh1,500 (U$15) and Sh2,000 (U$20) while a 2kg package sells at Sh100 (U$1),” decries Kenzi.

Researchers put it that only maize is grown in more countries than potato, with Africa producing about seven percent of global potato output, mainly in Egypt and South Africa. The crop is popular and valuable for both food security and income generation, competing well with maize in the subtropical climates at higher altitudes.

Under these conditions, year-round production can be possible, often with at least two seasons per annum. In recent years, however, yields have shown notable declining trends, mainly attributed to major disease outbreaks, inappropriate cropping practices by farmers, substandard seed quality, and lack of organized market infrastructure for produce.

Emerging markets for processed potatoes (such as chips, crisps, starch) have increasingly focused attention on the crop, with rising demand from the fast-food industry and processing for added economic value. Processed potatoes, however, also demand high levels of quality, which can be difficult to sustain in the face of high pest and disease pressures.

In Kenya, according to Farming Success with Potatoes in Kenya, a publication by the International Centre of Potato (CIP), potato is the second most important staple food crop after maize and is valued at nearly $500 million (Sh50 billion) annually.

About 800,000 Kenyans directly benefit from potato production, while across the whole value chain about 2.5 million people receive income from potato. However, in Kenya, yields have declined and currently average 9-10 tonnes per hectare, much below the potential of 20–40 t/ha, and this is reflected across the region.

As if Mother Nature is adding insult to injury, farmers like Ms. Kenzi’s woes are not helped by the emergence of new pests and diseases, such as the recently detected potato cyst nematodes (PCNs), Globodera rostochiensis and G. pallida, a key threat to potato production in eastern Africa, according to an article published recently in the Frontiers in Plant Science journal by International Centre of Insect Physiology and Ecology (icipe); International Institute of Tropical Agriculture (IITA); North Carolina State University, USA; and Kenyatta University, Kenya.

The occurrence of PCN presents a key threat to potato production in Kenya, as well as to the entire East Africa region where potato features prominently as a food security or income generation crop for millions of smallholder farmers. The good news, states the study in its conclusion, is that it may be possible to manage the nematodes by inducing ‘suicidal hatching’ of the pests using naturally occurring chemicals in crop roots.

Nematodes are tiny microscopic worms, with some soil-dwelling species infecting and adversely affecting most, if not all, cultivated crops. Potato cyst nematodes (PCNs) are invasive nematode pests that were first reported in Kenya in 2015 and have since been confirmed from other countries in eastern Africa.

Studies by icipe and partners have shown that these nematodes cause up to 80 percent yield loss in potatoes.

“The management of the nematodes understudy is particularly challenging due to the pest’s ability to survive in the soil as tiny protective cysts. These cysts can contain up to 600 eggs but are able to remain dormant in the absence of a host plant for up to 20 years. Once they infest a field, it is impossible to eradicate. Therefore, a possible effective approach is to avoid the build-up and spread of the pest,” says Prof Baldwyn Torto, Head of Behavioural and Chemical Ecology Unit at icipe.

In over 100 countries, this has been achieved by strict quarantine regulations because they are globally considered as the most important pests threatening potato production but are all too often overlooked in less developed countries.

The recent studies by icipe and partners aimed to manage their spread by exploring several known facts about potato cyst nematodes. First, is the fact that potato cyst nematodes eggs hatch only in the presence of suitable host plants such as potato, tomato, and African nightshade, which scientists refer to as the Solanaceae family.

Once hatched, the infective juvenile nematodes that emerge from the cyst seek host crop roots to invade and feed upon. The developing female nematodes swell and eventually become a new cyst full of eggs. These eggs hatch only once triggered by chemical signals produced by the roots of the host plant. The aim of the research was to identify these signals, and whether they can be exploited to induce hatch of the potato cyst nematodes juveniles in the absence of host crops and thus lead to their eventual death; or rather the ‘suicidal hatch’ of the nematodes.

“We noted that most juvenile PCN that hatched in response to some chemical signals, known as steroidal glycoalkaloids (SGAs) and steroidal alkaloids (SAs), remained encysted. In other words, they did not leave the cyst to invade crop roots but remained encapsulated in the cyst,” noted a Kenyan scientist, Juliet Ochola, who was involved in the research as part of her MSc studies, based at icipe and registered at Kenyatta University.

Prof Danny Coyne, a soil health scientist at IITA, explains that the SGAs and SAs could be used in synthetic forms to stimulate suicidal hatch of PCN in infested fields before farmers plant potatoes.

Alternatively, plants that produce the chemicals but are not usually infected by PCN could be incorporated in a crop rotation system to stimulate PCN hatch, thereby reducing populations of the pest.

“Blends of the compounds obtained from crude material of such plants may be used to treat potato fields as organic soil amendments. This approach would be environmentally attractive and better than using nematicides, which can be hazardous, and due to their dependence on single compounds, are prone to pest resistance,” says Prof Coyne.

The study presents the results of a countrywide survey undertaken to determine the distribution of PCN and the potential damage it is causing in the major potato growing regions of Kenya.

Additionally, the study team examined farmers’ potato production practices and how these will need to be taken into consideration for the implementation of future pest management strategies.

It is hoped that the information provided in the study will serve as a wakeup call that should further help policymakers and regional stakeholders to make informed decisions related to PCN containment and mitigation.

COVID-19: Journalists urged to put needs of the public at the centre of their work
May 16, 2020