You are here:
Agriculture 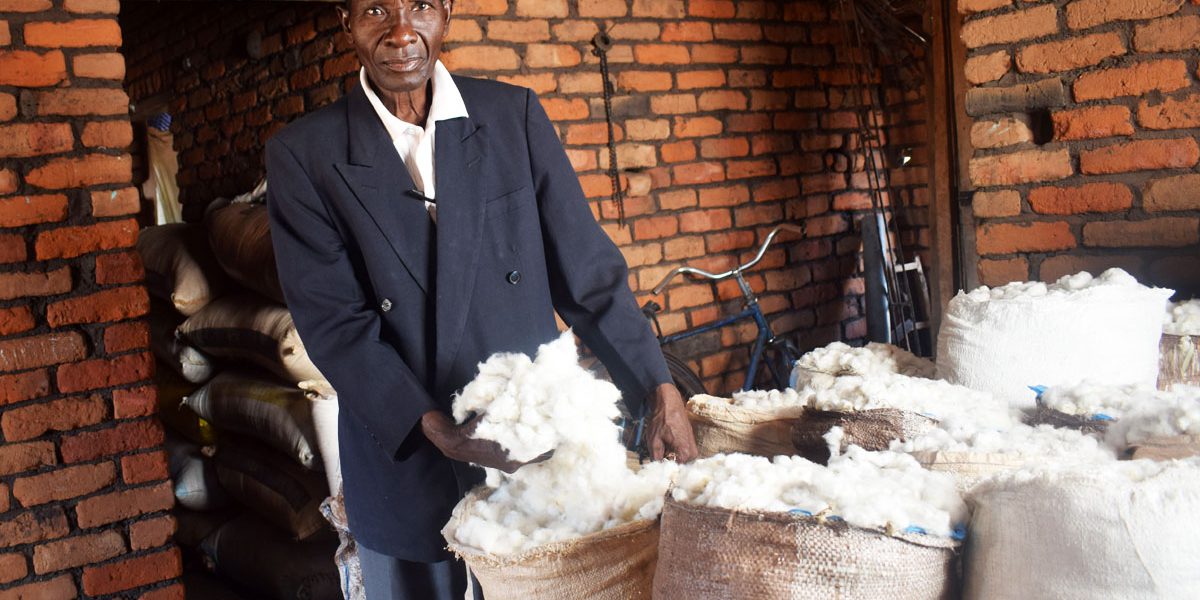 The farmers who planted Bt cotton for the first time in the last growing season took a gamble to depart from tradition.

France Thole, a cotton farmer in Chikwawa, Southern Malawi, was among the few farmers who were part of the field trials of the new cotton varieties, which have performed wonders elsewhere.

Through the trials, farmers had a feel of the new technology and were convinced this could be the way to go. But it was a real gamble, according to Thole.

“There was a lot of negativity from community members when we told them we wanted to try Bt cotton. In as much as we were convinced that the new cotton variety was better than the traditional seeds, we were still not sure if we would be successful,” says Thole, 60, who has been growing cotton for almost half his age.

“I can tell you the quality of the new variety is impressive; one plant gives you up to 150 bolls when the local variety would give 40-50 bolls. The cotton is thick and good looking.”

Bt cotton seed has been genetically engineered to make the crop resistant to bollworm. Scientists say this resistance significantly reduces the cost of production as one does not need pesticides now and again.

“If you follow instructions properly you gain more with this new variety. You can produce up to 3,000  bags per hectare while the old variety would you give you 1,000 -1,500 and yet it is also labor intensive because it requires frequent spraying of pesticides,” says Allan Tchalison, another farmer in the Lowershire zone.

Apart from his modern, fully electrified house, some herds of cattle, chickens, and goats, Tchalison sponsors his grandchildren’s education. His son’s daughter is in the second year pursuing an engineering course at the University of Malawi’s Polytechnic. Others are in secondary schools.

Tchalison vouches for Bt cotton as the best so far but pleads for improved extension work. He says at this stage farmers need close supervision because of their unfamiliarity with the new technology, which he believes is a game-changer if well handled.

Another cotton farmer, Mwayi Joseph Chirwa, a primary school teacher in Salima, Central of Malawi, 120 kilometers from the Capital Lilongwe, attests to the scientific claim that Bt cotton significantly reduces the cost of production and has a high yield. She estimates that from her piece of land she has been able to harvest double the usual yield.

“I followed instructions throughout, based on leaflets that I was given and also the advice from the extension workers but I could have missed a step or two…because it is new. I think if one follows the guidelines to the letter they can get more than double,” said Chirwa.

Malawi is among new entrants in a growing list of countries that have commercialized cotton in Africa which include South Africa, Ethiopia and Sudan are other examples. Kenya is yet to get its first harvest and so is Nigeria though they have commercialized the crop too. According to the Seed Trade Association of Malawi, 20,000 Malawian farmers planted the Bt cotton seed last season which just ended last month.

Cotton is one of the strategic crops in the national export strategy and if well managed, the genetically modified variety can significantly improve productivity, which has dropped at an alarming rate due to lack of investment.

With an allocation of K1.6 billion (USD2.2 million) in the 2011/12 financial year, Malawi was able to produce a record of 100,000 metric tonnes that year. Over the years,  this figure has drastically dropped;  the Cotton Council of Malawi estimates that on average the country is now producing about 15,000 MT per year, which rakes in K10 billion (USD13.5 million) against a ginning capacity of 600,000 metric tonnes. With the adoption of the new technology in Malawi, it is estimated that the country will soon produce nearly 40,000 MT.

According to the Chairman of STAM, Mr. John Lungu, stakeholders are now putting their heads together to ensure that the market for the bumper harvest is secured to ensure that farmers benefit wholly from their sweat.

“We hope the government may consider subsidizing the seeds just to boost cotton farming in Malawi. With this new variety which has shown that it has a higher yield, we expect more farmers to come on board and adopt it. So my appeal to government is to liaise with the seed making company to make the seeds available at an affordable price,” pleaded Rodgers Manjawira another farmer from Salima.

The African Institute of Corporate Citizenship (AICC), an NGO which has been pushing for improved cotton in Malawi, equally thinks one way of helping farmers is to have the seeds for Bt cotton subsidized and also strengthen extension work so that farmers have up to date information on Bt cotton.

AICC Chief Executive Officer, Felix Lombe, said: “We need to improve cotton production because it is a strategic crop for exports. The economy stands to benefit from cotton which has a ready market locally and internationally.”

Farmers in Eastern Kenya to earn USD40m from exports of green grams
November 12, 2019