The National Management Environmental Authority(NEMA) has called for the gazettement of wetlands within the county to protect the areas that are currently in grave danger according to experts.

Nema Boss Kisumu county Tom Togo noted that this was a serious challenge and it was very hard to protect the wetlands since there was no single one within the county that has been gazetted.

Togo challenged both the county assembly(incoming) and the county government to ensure that the wetlands are gazetted so that they can become protected areas to make conservation easy.

“Once they become protected areas, it becomes easy to manage them. But when wetlands appear in people’s farms or lands where they have titles sometimes it becomes very hard to stop them from utilizing those people of the land.”

He noted that his office had written to the county government severally on the needs and importance to gazette the wetland within the city or county as a whole.

Togo further gave an example of Dunga areas, saying the riparian community have not been supported in conserving the area.

He said in most occasions, they have witnessed the burning of the wetlands when they are preparing their farms for planting which is not good.

“If we clear the ‘bedroom’ we won’t have fish so let communities living around the lake take wetland conservation as something that is key in their life and should learn to coexist with this important resource.”

He was speaking in Kisumu during a media science cafe by Media for Environment, Science, Health and Agriculture(Mesha) themed, How management of Riparian Lands Impacts tourism along Lake Victoria.

The function brought houralist from Kisumu and other regions to Dunga swamp, a wetland situated on the shore of Winam Gulf Lake Victoria.

However, Environmentalist Michael Nyanguti said there is a lot of human conflict within the wetlands particularity encroachment around Lake Victoria.

Nyaguti chairman of Magnum Environmental Network encroachments of riparian wetlands of Lake Victoria is a threat to lake Victoria, fishery and biodiversity today.

This he said has led to depletion of fish stock in lake Victoria and now they see fishermen moving into the riparian areas targeting fish that is breeding.

“This is a dangerous trend that must be curtailed. We are urging like we always do all stakeholders to come on board to ensure that we can conserve our fisheries which is the source of livelihood for many of us.” 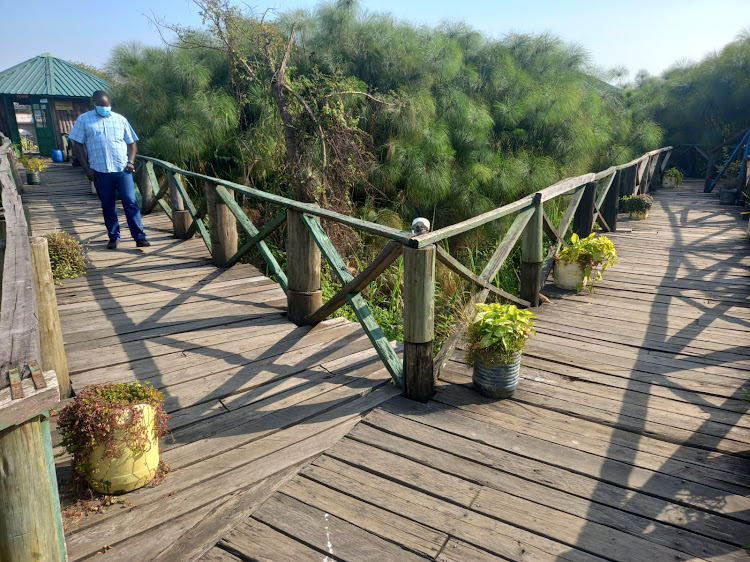 He noted that currently there are people who after buying or purchasing land next to the lake, think they own all that land in the waters.

“They are encroaching into the wetlands and destroying wetlands vegetation, and even releasing raw sewer and other substances into the lake hence negating the effects of conservation that is supposed to happen around the lake.”

He added that they have been always calling upon the enforcement agencies to ensure that before anyone carries out any development on the waterfront, all laws are in place and people don’t go against them.

“We also have human-wildlife conflict as a result of this. Most of the vegetation along the shoreline are being destroyed, we have hippos along lake Victoria who needs restring and strolling ground, and if this vegetation is destroyed by encroaches then we can’t even attract tourist.”

In February this year during the celebration of World wetland day, Kisumu city manager Abala Wanga put on notice wetland grabbers saying their structures will be brought down and activities stopped to conserve such areas.

He said the wetland serves a huge role in society as they act as a fish breeding ground, water purifiers, carbon filters, sources of different materials, water storage and food control.

Abala noted that Dunga faced a lot of challenges including but not limited to water pollution in the city and surrounding slums, encroachments (main problem), over-harvesting papyrus, cattle grazing and overfishing.

“This is the third notice we are going to issue once the county government does approvals on the wetlands and gazette them. Whether you hence a storey building in there we will bring it down to conserve this area.”