The media has been challenged to be at the forefront in reporting climate change issues even as the COP-27 conference approaches.

While addressing climate change journalists from Africa last Tuesday in Kigali, Rwanda Environment Management Agency deputy director Mr Faustine Munyazikwiye noted that access to climate change finance, carbon trade mechanisms together with loss and damage are top issues that Africa will be discussing in the conference.

He explained that African countries need to be ready to sustainably trade in carbon so that the continent does not lag behind. “Africa must identify her losses and to do this, they have to clearly work on the methodology of identifying the losses as well operationalise funding mechanism taking into account the fate of vulnerable countries.

According to Mr Munyazikwiye who is also Rwanda’s Intergovernmental Panel on Climate Change (IPCC) Focal Point, the media need to understand the expectations of their respective governments and Africa in general to help push the continents agenda at the COP. He stressed on the need for Africa to access finance behoving governments to go to the gathering with a clear picture emanating from the process of mobilising for $100bn pledged in the Paris Agreement.

According to the Director of Power Shift Africa, Mr Mohamed Adow, COP27 which will be held in Sharm El Sheikh, Egypt takes place on the frontlines of the climate crisis, at the peak of compounding, interlinked, international and local crises on food, energy and environmental security, and escalating cost of living everywhere.

“These crises can only be tackled if governments work together. COP27 will be a test of their resolve to agree to new forms of collaboration to address these challenges,“ said Adow.

He said that the $100bn is just a drop in the ocean because the continent needs nearly $150 trillion to contain the impact of climate change.

Progress on all pillars of the Paris Agreement, he told the journalists, is needed as part of the COP27 package. These, he pointed out are financing climate goals, adaptation action, loss & damage responses, and cutting emissions for 1.5°C.

“As an ‘African COP’, it is expected to spotlight finance, adaptation and loss & damage; for many developing countries, issues neglected at COP26,” he observed.

Climate experts hold it that at a time of food, energy, nature and debt crises and escalating cost of living, that can only be tackled if governments work together, COP27 is a political opportunity for governments to show they are moving beyond deep geopolitical rivalries to respond together to the threats causing national and global insecurity in 2022 through implementation as well as demonstrating implementation on climate promises of the past.

While addressing journalists in a separate meeting two weeks back, Ms Patricia Nying’uro challenged reporters to continuously highlight these issues to save the globe.

Ms Nyinguro, a climate scientist who works at Kenya Meteorological Department, and doubles up as the Intergovernmental Panel on Climate Change (IPCC) Focal Point for Kenya noted that other diverse implications of the phenomenon have been responsible for reduced economic growth across Africa, increasing income inequality between African countries and those in more temperate climates.

She stressed that Africa as a continent with a lot of challenges need to come up with urgent African led solutions to deal with these climate change problems.

“Climate change has great impacts on our health, ecosystem, water security, food security. These are some of climate change issues to be discussed during the COP-27 in Egypt,” she said.

The preCOP-27 media conference was called to sensitise African journalists on the issues at hand in the Egypt meeting due from Nov 6 to 18, 2022.

The event was held as a result of a partnership between Internews, Power Shift Africa and Media for Environment, Science, Health and Agriculture (MESHA) and Rwanda Media Commission. MESHA will be sponsoring 17 journalists from eastern and southern Africa to attend the conference.

The media conference came at a time US Senate voted to join more than 130 nations in pledging to phase out the use of super-polluting greenhouse gases found in refrigerators and air conditioners, a step that is expected to avoid as many greenhouse gas emissions as the entire planet emits every two years.

By a vote of 69 to 27, the Senate ratified the 2016 Kigali amendment to the Montreal Protocol. Two-thirds of the senators present were required to vote yes for ratification.

The Kigali amendment went into effect in many nations in 2019 — but not in the US. The Trump administration declined to submit it to the Senate for approval, despite unusually broad-based support from politicians in both parties, industry and environmental advocates.

A further rise will spell doom to the already affected communities.

Societies that largely depend on natural resources are affected the most. Efforts to limit the global temperature increase to 1.5 degrees Celsius will mean urgent end to the fossil fuels era. Progressive governments are already ahead of the game in phasing out fossil fuels and phasing in renewable energy. Some have adopted targets and plans for their power systems to reach 100% renewable energy as early as 2020.

Kenya might have contributed the least to global climate change. However, despite its low emissions, Kenya is one of the countries’ most vulnerable to the climate crisis. It remains highly dependent on low-productivity agriculture for food, income, and employment. Temperature rise even if limited to 2 degree Celsius, increases the risk of droughts and flooding in Kenya.

Kenyans know the challenges of droughts and floods. In recent years Kenyans have battled the worst and devastating drought and flooding events. At a global warming of 1.5 degrees Celsius, projections indicate that the amount of dry days in countries like Kenya would increase per year.

Therefore, the transition to clean renewable energy needs to happen much faster. 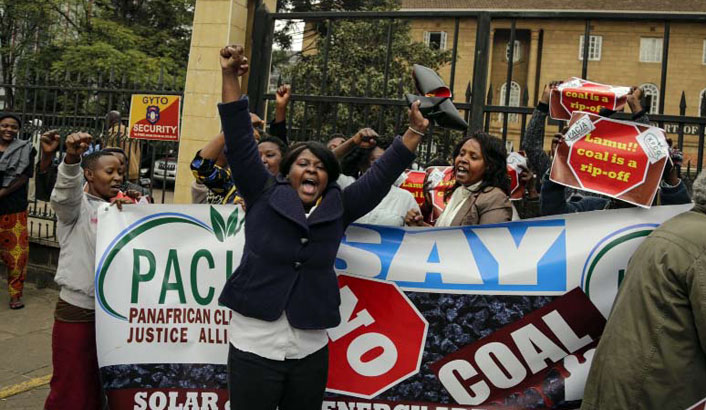 The Kenyan government’s proposal for a coal power plant in Lamu is strange because Kenya has more than enough current capacity and potential for renewable energy generation to not only meet current electricity demands, but also to meet and exceed the projected demands through 2030.

Because of its high carbon content, coal emits more carbon dioxide than any other fossil fuel when burned. It makes sense then that coal combustion is the number one contributor of human caused carbon dioxide increase in the atmosphere. Worse still, coal mining produces methane, a greenhouse gas with a global warming potential 25 times greater than that of carbon dioxide. Coal is the most polluting energy source on the planet emitting more than 60 different hazardous air pollutants. The coal industry stands in the way for a safe and healthy future for all of us. It threatens our most basic needs from the air we breathe, the water we drink and from a safe environment we all seek shelter.

The Kenyan government must face the truth that we are no longer in the business of managing carbon pollution.

Emissions must be phased out. This means dropping its plans to invest in coal and focus on renewable energy. Politicians keep talking about the seriousness of the climate crisis, yet the same politicians continue allocating taxpayers money to corporations seeking to develop coal in Kenya. It is sad that our leadership is not consistent with what they say and do. As a result, we remain stuck in exploring the old, expensive, dirty and dangerous energy sources such as coal as the whole world moves to cleaner and renewable energy systems.

Investing in fossil fuel projects like coal mines locks countries into coal energy dependency for decades. The adoption of cleaner energy supply options such as solar, wind and geothermal means, Kenya will avoid a high carbon lock-in that other countries have experienced in their economic growth pathway.

In addition, this will enable Kenya to contribute to limiting temperature rises above 2 degree Celsius that threaten lives of its citizens and ensure that Kenya attains energy security for its prosperity and future.

The country offers rich resources for sustainable electricity generation. It has a significant amount of annual sunlight hours with a high irradiation. Despite Kenya having high insolation rates, the percentage contribution of solar energy to the total energy mix is insignificant (less than 1%). The potential for wind energy is proven to be viable in various regions including Marsabit, Turkana, Ngong and the Coastal region that can support commercial electricity generation.

Kenya is endowed with enormous geothermal resources which are mainly located around volcanic centres within the rift valley. The unexploited geothermal power potential is estimated to be in the range of 4000–8000 MW.