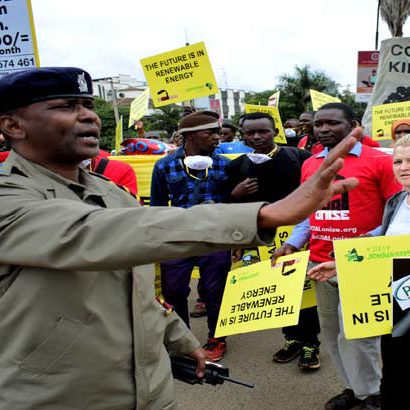 A further rise will spell doom to the already affected communities.

Societies that largely depend on natural resources are affected the most. Efforts to limit the global temperature increase to 1.5 degrees Celsius will mean urgent end to the fossil fuels era. Progressive governments are already ahead of the game in phasing out fossil fuels and phasing in renewable energy. Some have adopted targets and plans for their power systems to reach 100% renewable energy as early as 2020.

Kenya might have contributed the least to global climate change. However, despite its low emissions, Kenya is one of the countries’ most vulnerable to the climate crisis. It remains highly dependent on low-productivity agriculture for food, income, and employment. Temperature rise even if limited to 2 degree Celsius, increases the risk of droughts and flooding in Kenya.

Kenyans know the challenges of droughts and floods. In recent years Kenyans have battled the worst and devastating drought and flooding events. At a global warming of 1.5 degrees Celsius, projections indicate that the amount of dry days in countries like Kenya would increase per year.

Therefore, the transition to clean renewable energy needs to happen much faster.

The Kenyan government’s proposal for a coal power plant in Lamu is strange because Kenya has more than enough current capacity and potential for renewable energy generation to not only meet current electricity demands, but also to meet and exceed the projected demands through 2030.

Because of its high carbon content, coal emits more carbon dioxide than any other fossil fuel when burned. It makes sense then that coal combustion is the number one contributor of human caused carbon dioxide increase in the atmosphere. Worse still, coal mining produces methane, a greenhouse gas with a global warming potential 25 times greater than that of carbon dioxide. Coal is the most polluting energy source on the planet emitting more than 60 different hazardous air pollutants. The coal industry stands in the way for a safe and healthy future for all of us. It threatens our most basic needs from the air we breathe, the water we drink and from a safe environment we all seek shelter.

The Kenyan government must face the truth that we are no longer in the business of managing carbon pollution.

Emissions must be phased out. This means dropping its plans to invest in coal and focus on renewable energy. Politicians keep talking about the seriousness of the climate crisis, yet the same politicians continue allocating taxpayers money to corporations seeking to develop coal in Kenya. It is sad that our leadership is not consistent with what they say and do. As a result, we remain stuck in exploring the old, expensive, dirty and dangerous energy sources such as coal as the whole world moves to cleaner and renewable energy systems.

Investing in fossil fuel projects like coal mines locks countries into coal energy dependency for decades. The adoption of cleaner energy supply options such as solar, wind and geothermal means, Kenya will avoid a high carbon lock-in that other countries have experienced in their economic growth pathway.

In addition, this will enable Kenya to contribute to limiting temperature rises above 2 degree Celsius that threaten lives of its citizens and ensure that Kenya attains energy security for its prosperity and future.

The country offers rich resources for sustainable electricity generation. It has a significant amount of annual sunlight hours with a high irradiation. Despite Kenya having high insolation rates, the percentage contribution of solar energy to the total energy mix is insignificant (less than 1%). The potential for wind energy is proven to be viable in various regions including Marsabit, Turkana, Ngong and the Coastal region that can support commercial electricity generation.

Kenya is endowed with enormous geothermal resources which are mainly located around volcanic centres within the rift valley. The unexploited geothermal power potential is estimated to be in the range of 4000–8000 MW.