Experts: Not all TB infections come with a cough

You are here:
Uncategorized 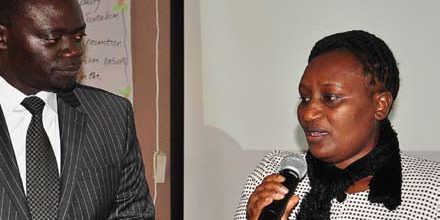 Beryl Atieno, a middle-aged TB survivor who hails from Rarieda in Siaya County, had no idea that she had contracted the infectious disease when she started ailing in March 2017.

Atieno was not coughing and therefore had no reason to suspect she had tuberculosis even though she had other signs and symptoms like high fever, loss of appetite, loss of weight among others for one week.

To her surprise, she was diagnosed with TB when she went for screening at the local Madiany Hospital and immediately put on treatment for 6 months under close surveillance until she was cured completely.

“As a TB survivor at first I thought it was normal ailment and I had no reason to imagine that I had contracted it. However after my diagnosis I followed my prescriptions to the letter until now that I am well,” Atieno says.

Just like Atieno, there are a number of people who suffer in silence because of ignorance about tuberculosis, an airborne infectious disease.

TB still remains in the top 10 causes of death worldwide according to World Health Organization.

In Siaya County, Western Kenya, the high TB burden has been attributed to poor health seeking habits among residents who are prone to contracting the infectious disease.

According to the county Tuberculosis and Leprosy Coordinator, Mrs. Mary Wambura, the County records about 2,000 to 2,500 TB patients yearly, placing it among top ten most heavily burdened by the disease in Kenya.

She says that Siaya is also ranked position three in the number of TB patients who have developed Multi-Drug Resistant (MDR) TB. She adds that since 2012 the county has recorded 82 of such patients.

“This high incidence of TB related disease is unacceptable and the society need to have a positive behaviour change in curbing the spread of the airborne disease,” the coordinator advised.

Wambura mentioned that it is very costly to treat MDR TB and revealed that the Kenya spends up to Ksh 2.1 million treating one MDR TB patient “Patients who have contracted TB should adhere to normal TB treatment to avoid escalating to other stage which become expensive and difficult to treat,”

she advises. In the fight to end TB, the coordinator announced that the county health facilities are currently administering one anti -TB drug called Isoniazid to children under five years who stay with TB patients as a measure to prevent them from contracting the disease.

However, she regrets that some parents and guardians still fail to bring their young ones to get the drug hence putting them at high risk of infection.

“Once infected, children get subjected to traditional medicine and other nonmedical means and in the long run they end up dying without being treated for TB,” she regretted.

The health department has also innovated a TB active case finding stamp that helps in identifying and screening TB patients who visit health facilities in the county.

According to the Centre for Health Solutions Technical Adviser on TB in Siaya, Mr. Duncan Barkebo, the TB stamp contain four questions that will be used to screen all patients who seek medical attention in the health facilities.

Barkebo mentioned that the TB active case finding stamps have been distributed to all health facilities within the county so that all the patients get to be screened for the disease.

He regretted that Siaya County has been losing 10 per cent of TB patients every year due to late diagnosis and by the time they start treatment, their immune system is usually very low to respond to the treatment being administered to them.

“This stamp innovation is one of its kind in Kenya and this will ensure no patient is left out in TB screening since the stamp contains four crucial question that will guide clinicians in identifying patients who have contracted the disease early enough for treatment,” Barkebo added.

In 2017 the county recorded 1,700 patients with TB, unfortunately 170 people out of the number died due to late diagnosis.

This, Mr. Barkebo says is unacceptable since it is way beyond the National TB program’s acceptable percentage of less than 5 percent mortality on TB.

TB coordinator Wambura further revealed that the county has 155 TB centres spread across the six subcounties where individuals diagnosed with TB can get treatment. 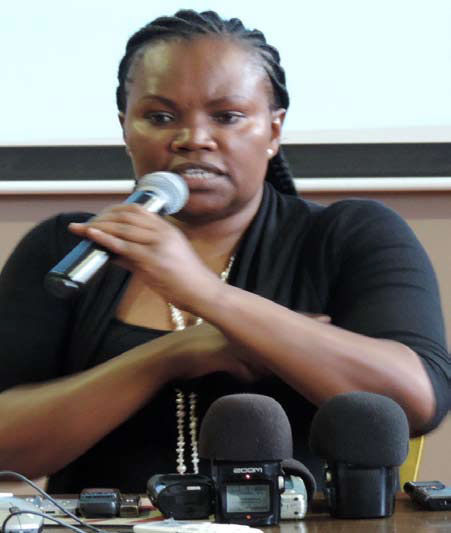 Ms Rose Kaberia, a survivor of MDR TB strain, addresses MESHA journalists during a past media training on infectious diseases

There are effective machines to detect TB by use of sputum and they can be found at Siaya County Referral Hospital, Madiany, Bondo, Matibabu in Ukwala, Ambira and Yala sub county hospitals.

Wambura mentions, “With the machines in place in major health facilities within the six sub counties, locals can seek services closer to them unlike in the past where they had to travel long distances.”

Many people still think that patients who have TB are automatically infected with HIV/AIDS, a notion Mrs. Wambura is discarding saying its false and further advised residents to seek TB testing early as a preventive measure to avoid developing MDR TB.

“The stigma on TB is still high since most patients fear going for testing thinking that they are going to be associated with HIV/AIDS and other customary which are faults, “she mentioned.

Kenya is among countries with the highest TB burden in the world with a prevalence rate of 291 cases per 100, 000 people.

This has greatly been contributed by the high poverty levels in the country estimated at 45.2 per cent through poor nutrition, overcrowding, alcohol and substance abuse and poor access to health care services.

It is all systems go as Kenya prepares to host Pan African science journalists conference
April 19, 2020