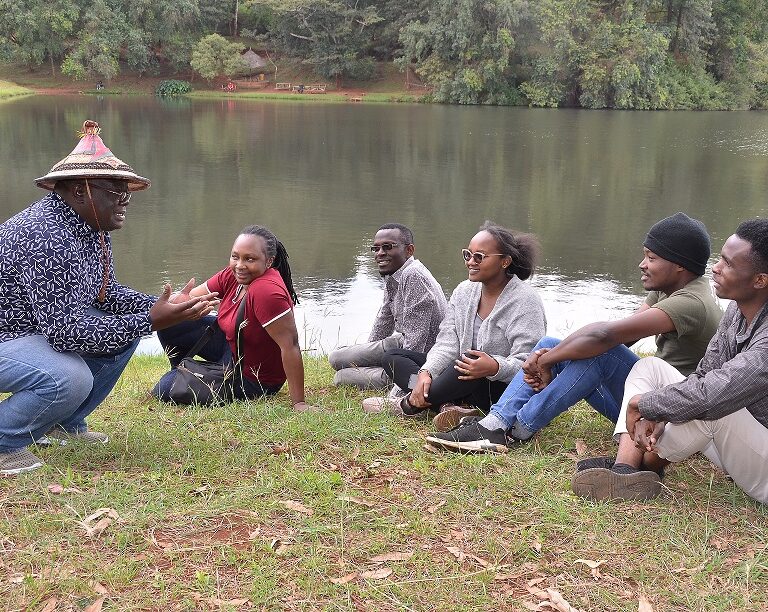 What started as a goat eating party turned into a great learning and networking session for the members of Media for Environment, Science, Health and Agriculture (MESHA), Nairobi Chapter.

The members converged at Paradise Lost, Kiambu County, on June 11, 2022, to let off steam after a busy half of the year. It was the first time the Nairobi Chapter was holding such a meeting, which was an opportunity to know each other and exchange ideas on how to grow MESHA to greater heights.

The event brought together all categories of members, including veterans and founders of the organisation.

Before the veteran journalists settled down to share their golden past and wisdom in what was akin to a formal meeting, the younger members could not waste the chance to sample what Paradise Lost had to offer.

They literally got lost into a range of fun activities; from boat riding to a photo session in a natural environment that Nairobi residents rarely see, before everyone settled down for mouth-watering delicacies – roast goat, fried chicken and vegetables, washed down with a blend of soft drinks and high quality alcohol.

Then it was time for the veterans to spit some wisdom and share the journey they have walked with MESHA since its inception.

“Back then, our editors kept telling us that science doesn’t sell and they were not keen on creating science desks in newsrooms. So, when we formed MESHA, very few people took us seriously,” said Wambera Ojanji.

They also shared their personal experiences as journalists and writers, the highs and lows they have had during their careers, the challenges they faced and the good times, including the accolades they have received and the fulfilment that comes with doing their job and following their passion.

“Despite the harsh words from our editors, we did not get discouraged and the efforts eventually paid off. Soon enough, science stories started getting space on the front page of newspapers and we never looked back,” said Mike Mwaniki.

The veterans encouraged the younger members, including students, to put in the work, be diligent and never be afraid to chase opportunities that come their way as they further their careers. They also spoke on identifying relevant stories and the whole process of coming up with a story from research to publication.

They pointed out how easy it is for the younger generation to research, authenticate and validate their stories as compared to the past when there was limited access to research and sources.

With the advancement in technology, getting information has been made easier. Research materials are just a click away unlike in the old days when one had to visit the library to get a reference.

They also emphasised on upholding the winning spirit within the organisation and supporting each other. MESHA journalists have won various accolades, with the most recent one being John Riaga who was appointed Science Journalism Forum coordinator for sub-Saharan Africa.

The younger members said they have so far benefited from MESHA and hope to learn a lot more from the entire membership.

“I have learnt from veteran journalists the best practices in the industry and from here I’ll be able incorporate this with the mentorship I have received to make my science stories better,” said Kairu Karega, a student journalist at the University of Nairobi.

“There are a lot of established journalists in MESHA. Some have been in the industry for over three decades and have accumulated knowledge on how to do different tasks. Take the chance to consult, network and ask questions. They are ready to guide,” he said.

Agatha Ngotho, a board member of MESHA, sought the opportunity to formalise the Nairobi Chapter and promised more such networking and fun sessions.