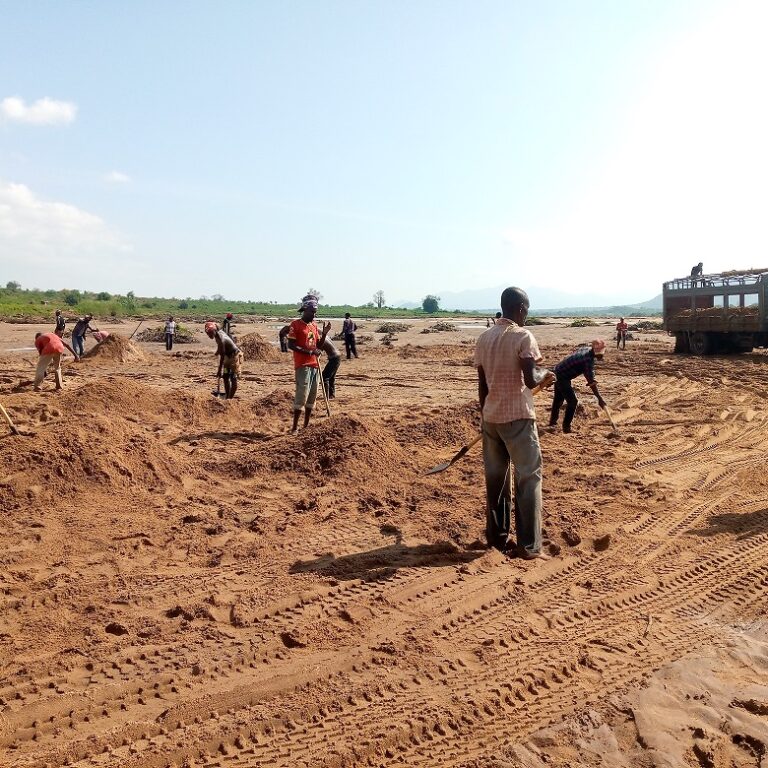 About 15 years ago, Alfred Musyoki led a thriving business trapping fish in River Tana, he would hawk his daily catch to vendors who supplied their trade as far as Machakos and Kitui.

Musyoki comes from the Kiromboko area in Mutuobare, across the Embu-Kitui border. The border is marked by the River Tana, which according to the Freshwater Ecoregions of the World(FEOW) study, flows through extensive wetlands and mangrove stands, creating an ideal habitat for the mudfish species.

Mudfish are identified through their small size, tubular, highly flexible, scaleless body with rounded fins, well-developed flanges on the caudal peduncle, tubular nostrils, small or absent pelvic fins, and mottled brown coloration is becoming extinct despite dominance in rivers in the past.

However, as the waters reduced, perhaps due to deforestation upstream, a new crop of business people, raided the region with trucks and shovels.

Musyoki says due to sand harvesting, the waters flow fast and fish are unable to thrive.

“Most fishermen have opted out because it is difficult to continue with the trade,” he told The Star.

“The fish market is facing a challenge of lack enough fish leading to vendors opting to outsource their fish from other regions outside the county,”

The fishermen sell a kilogram of fish at Sh200 to vendors, who then sell it at a set price according to demand.

According to the United Nations Environment Programme (UNEP), sand is the second most used resource worldwide after water.

Sand is not only the source of infrastructural raw material but also a base resource that supports life.

Sand harvesting which has been going on for 20 years now in this part of river Tana, has seen the river’s aqua life degrade due to diverted waterways and cleared vegetation.

Reeds lining the river banks have also been disturbed, affecting the habitats of mudfish, which dwell in areas rich in dense vegetation with slow-flowing water.

Gideon Musyoki says the reeds and branches are used to trap sand and prevent it from flowing downstream.

“My work is to trap the sand using branches to prevent it from flowing downstream,” said Gideon.

The demand for sand in recent years has been catapulted by the rapid infrastructural growth within the country.

The sand harvested in Kiromboko is mainly used for economic purposes which include construction sites in the neighbouring and distant counties of Kiambu and Nairobi.

Tata Nzule the Kiromboko the sand harvesting site coordinator, says the area can produce over 500 lorries of sand a week during the dry seasons when the water level decreases.

“During the dry season, we load close to over 70 lorries a day, because we work for 24 hours or until late at night. We have the potential to load over 100 within 24 hours and thus in a week we can surpass 500 lorries,” said Nzule.

Despite infrastructural growth playing a major development role in the country, the impacts of the unhealed wounds left behind by sand extraction in rivers are immensely affecting aqua life.

Besides fish, crocodiles, hippopotamus, and birds which play a role in promoting tourism are also affected.

Already, Mudfish are fast migrating from these rivers due to sand harvesting.

These rivers serve as the home for most fish species which have been a source of food, income, and the most coveted health nutrients of omega oil necessary for brain development.

A study from the Food and Agriculture Organization of the United Nations (FAO) shows that the annual fish demand in Kenya is 600,000 tonnes while the current production lies at 400,000 tonnes, yet the country boasts of vast aquatic resources amounting to 1.14million hectares worth of fish production capacity of 11 million tonnes.

Stanley Mbugua, a fish vendor who has been in the business since 1995 and a resident of Machakos, says the business is facing a huge challenge brought about by the biodiversity interference impact.

He adds that he has been forced to travel to Naivasha in search of mudfish and catfish which are among his customer’s favourites.

“The fish business has turned into a nightmare since prices have risen compared to earlier when our water sources experienced fewer activities compared to now,” he said.

The situation has not been different for Boniface Mwanzia, a fish vendor who said he has been forced to raise the prices since the cost from fishermen and transportation from other regions is increasing daily.

“Not all fish species are available in rivers within the county. We’re forced to transport catfish and mudfish from as far as Naivasha and it’s costing us a lot of money. This has worsened the job since the customers are always complaining about the prices. We don’t have an option but to sell at a loss in some instances because fish can’t be stored for long,” he adds.

Embu County National Environmental Management Authority (NEMA) Director Boniface Birichi, says the sand harvesting in River Tana in Mbeere south has been mistaken and the exercise taking place is desilting, which is meant to prevent excess sand from flowing into the Kiambere hydroelectric dam and decreasing the required water levels.

“When conducting desilting exercises, it cannot be 100 percent harmless. There will be some impacts which we assess and indicate how they should be mitigated,” said Birichi.

The matter has not been lightly received by environmental and human activists who have criticized how the County government and other relevant bodies have been treating the issue.

Environmental, Social welfare, and Justice activist Taratisio Ireri Kawe point out that sand scooping and harvesting within the areas of Kiromboko in Mbeere South and Marivwe, Muthanthara, among others in Mbeere North has left the people poor and without proper nutrition found in fish.

He said the government should sensitize communities on the importance of fish as a source of food and employment without causing harm to aquatic life.

“County government should regulate and enact laws that will control the mining of sand within the county. I tell the people to see not only sand but also the opportunities that would come with the fish business in these rivers,” said Kawe.

The Mining Act of 2017 in Kenya places sand in the same line as other natural resources which are under the national government’s control despite its location.

On his side, Simon Kang’iri an environmental activist and conservationist say sand harvesting has led to dried rivers and destroyed aqua life and the situation is heading to worse if not well managed.

He adds that sand harvesters should put into consideration the dangers of uncontrolled harvesting.

“As the harvesting takes place day by day, we lose our water living organisms and lose our rivers as well. We are also losing the important vegetation along river lines,” he explains.

This story was first published by The Star Newspaper courtesy of JRS Biodiversity Foundation story grant to MESHA.