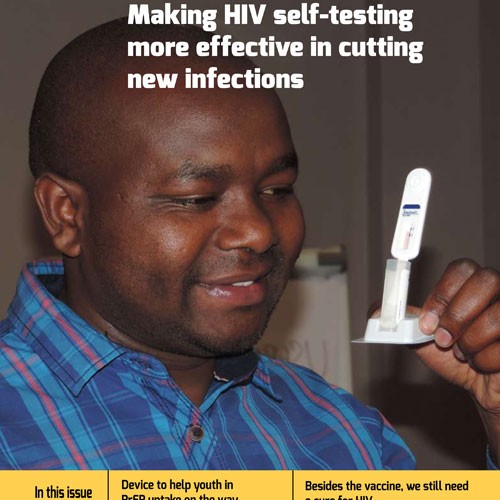 Several years ago, Tony  Nyongesa, who lives in Nairobi, would walk into a health facility every three months to test for HIV.

This was until last year when he learned of the self-test kit from a scientist friend.
“I first visited him in his office where he tested me and I saw how it worked. He then gave me two kits and instructions on how to use them.

I went home and my wife and I took the test together,” Nyongesa narrates. The 32-year-old teacher says they received their results in less than 10 minutes. He admits this option has saved him and his wife fear and stigmatisation from people.

He still takes the test every three months, only that this time he uses the self-test kits, thanks to his friendship with the scientist.

“Before I could go for a test, I was very worried of people talking. I would also ask myself, ‘what will happen to me if I test positive’,” he says.

Gideon Oduk, a resident of Busia County, has also used the self-test kit. He says in 2019 when he wanted to know his HIV status, he walked into a support centre in the area where he was given the kit.

“I talked to a friend who does HIV testing and counselling and he gave me a kit and told me how to use it,” Oduk says.

He says his worst moment was the period he was waiting for the result. He says he was apprehensive of what would happen next if the result turned out positive.

“I used it once and I have not had reasons to do another test. Self-test is more confidential,” he says.

For a musician based in Nairobi, however, he first and last heard of self-test kits in a local radio programme. He says he heard a guest in the show talk about it and how easy it is for one to test at the comfort of their homes. Unfortunately, he has never seen the kit or heard of it again.

“The government should supply more self-test kits and make them available to the local people. They should also do more awareness,” he urges.

The kits have been supplied in some institutions of higher learning. They are also available in health facilities, some at a fee and others for free.

A counselling psychologist specialised in HIV, Alfred Nandwa, says the self-test kit is a remarkable step in the fight against the scourge, but it has its own challenges. For instance, it may at times give false results, which is dangerous.

“When you walk into a health facility for a test, there is usually pre-test and post-test counselling. But in using self-test kits there is no counselling, which is also dangerous,” says
Nandwa.

If the test result is positive, says Nandwa, the person is supposed to visit the nearest health facility for a confirmatory test. He also raises a concern about partners accepting the results, saying some may live in denial.

“When people in a sexual relationship decide to do self-test then one turns out to be positive and they have had unprotected sex, a dangerous fight may ensue between them,” says Nandwa. In doing a self-test, one can either use blood base or oral base sample, which you swab from your gums.

Prof Kenneth Ngure of Jomo Kenyatta University of Agriculture and Technology (JKUAT) says selftest kit is mostly targeted at men because they have a poor health seeking behaviour and their uptake of HIV services is lower.

“They are known as screening tools. So, when the result is positive or one is unable to interpret it, they are required to go to a facility for confirmation. However, for a negative result, you don’t need to go for confirmation,” he said.

Prof Ngure was speaking during a science café on HIV prevention organised by the Media for Environment, Science, Health and Agriculture (MESHA) on August 28, 2021. The café was attended by science and health journalists from Kenya.

Kenya launched the self-test kit in 2017 in response to the low testing rates, especially among young men.

According to UNAIDS, in 2015, there were an estimated 78, 000 new HIV infections in Kenya. UNAIDS report also indicates that around 400,000 of the 1.5 million people living with
HIV in Kenya by then did not know that they had the virus and so did not seek life-saving treatment.